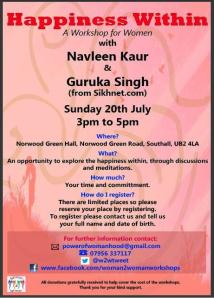 An opportunity to explore the happiness within, through discussions and meditations on Sunday 20th July, 3pm to 5pm, at Norwood Green Hall, Norwood Green Road, Southall, UB2 4LA.

Today is White Ribbon Day.  Men are actively campaigning and committing themselves to this statement:

I pledge never to commit, condone, or remain silent about men’s violence against women in all its forms.

Restoring Dignity is a great resource for religious and non-religious people who want to learn more.  It looks at different traditions and teachings.

“Ever since I was a wee boy in the playground I’ve hated violence. Violence against anyone. But I’m particularly opposed to violence against women: It’s the action of a coward. I’m dead against it.”  Brian Cox, Actor (from White Ribbon Campaign)