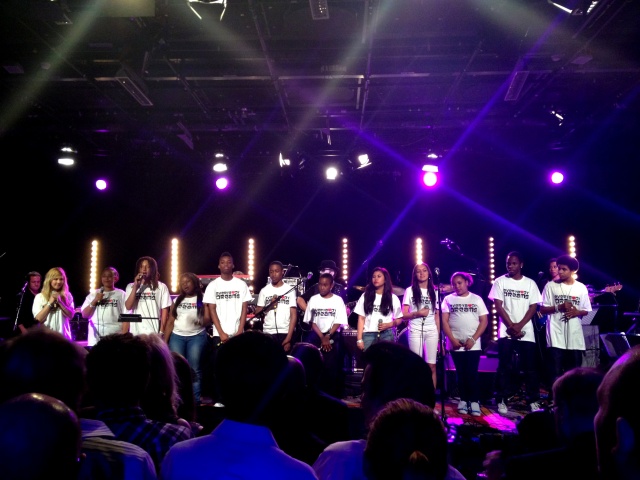 A roar of applause went up for Tottenham students after their performance of “Everybody Dreams”.  The concert, Music That Changes The World, can be viewed on Livestream.  The line-up included KT Tunstall, Jihae, Daryl Hall, MOBY, Mike Scott & The Waterboys – and Hans Zimmer spoke movingly about the plight of Roma communities across Europe.

London Boroughs Faiths Network is proud to be part of the 2012 Hours Against Hate coalition (and 2012 Hours is part of the London Peace Network – great to be in partnership), which asks you to do something for someone who does not look, live, pray or love like you – there are fantastic volunteering opportunities across the capital this summer, including those co-ordinated by Faiths Forum for London.

Congratulations to Alex Goldberg and the organising team!   Alex writes

Secretary of State Hillary Rodham Clinton announced her support for the UK NGOs who have come together to the launch a 2012 Hours Against Hate campaign aimed at brining communities together as the campaign released its Walk-A-Mile smartphone app to promote global tolerance and fitness.

Initiated by the Department of State’s Special Envoy to Monitor and Combat Anti-Semitism Hannah Rosenthal and Special Representative to Muslim Communities Farah Pandith and UK NGOs 2012 Hours Against Hate is a campaign to stop bigotry and promote pluralism and respect across lines of culture, religion, tradition, class, disability, and gender.

Using social media, the initiative asks young people to pledge an hour or more of their time to help someone who does not look, live, or pray like them. 2012 Hours Against Hate highlights Secretary Clinton’s commitment to the potential of young people to change the world.

“More and more, I see communities and people turning their backs on old boundaries and barriers and finding new ways to bridge divides. That’s the idea behind the 2012 Hours Against Hate campaign,” said Clinton.

You can download the Walk A Mile app and listen to Dave Stewart’s Man to Man, Woman to Woman here.